Home
››The Dark Side of Heaven 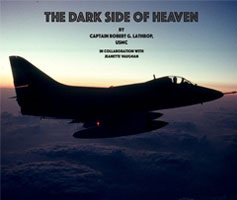 The Dark Side of Heaven

What does it take to erase memories of the atrocities of war? Many a veteran of conflict struggle with this question. Through withdrawal, social faux paux, story telling or even failed self-medication with mind altering substances they attempt to numb the horrific images, sounds, nightmares, panic attacks, moral questioning paranoia and psychoses as survivors of war. Welcome to the world of post-traumatic stress disorder.

Our Vietnam veterans attempt to cope with this each and every day. They celebrate their successes in reunions and camaraderie, but for some, when they return home and are alone in their private thoughts, the negative thoughts return. Like an incessant, never-ending trauma.

This collection of poems was written by Captain Robert Gene Lathrop, USMC who served as an A-4 Skyhawk pilot for VMA 311 during the Vietnam war. Experience the air war from Vietnam, its successes and atrocies as told in the volume of prose, photography and pen and ink drawings. Veterans of any conflict, their friends and families will be able to relate to the descriptive passages of surviving war time and the aftermath of post traumatic stress disorder.

Gene flew and loved the MacDonald Gruman A-4 Skyhawk. He wrote the poems from 1970 until 1987, upon his return from his service in Vietnam. He believed the content could easily reflect other U.S. military conflicts, both past and present simply by changing the names. The poems change in intensity over the period of time they were written as the author passed from remembering Vietnam with the numbing effect that protects one in the harshness of combat, to one of moral bankruptcy and confusion, to a period when he regained his normal moral view of such actions as were required in combat. The last seven poems reflect disillusionment with the violence of war and are not unlike the post-traumatic stress disorder that affects all of our veterans of foreign war, especially under threat of terror. His hope was that all who read them find richness and camaraderie in their meaning.